We are honored to have our project, the Santa Monica Proper Hotel, recognized as a 2021 Preservation Award winner by the Los Angeles Conservancy! Congratulations to the entire team who contributed to the success of this project, including the Kor Group, Howard Laks Architects, and Chattel, Inc.

Located in downtown Santa Monica, the project included the restoration and adaptive reuse of the Landmark Professional Building, a historic building designed in 1928 by architect Arthur E. Harvey into a luxury hotel. Originally built as a medical building, the Spanish Colonial Revival style structure was converted into commercial office space in the 1950s. Together with The Kor Group, Howard Laks Architects, and Chattel, Inc., Morley Builders modernized the building and added a new seven-story contemporary concrete structure to become what is now the Santa Monica Proper Hotel.

Rehabilitation of the Landmark Building included the conversion of existing office spaces to hotel rooms; seismic and building and safety upgrades; new mechanical, electrical, and plumbing; and full compliant disabled access standards. Original design features of the building were preserved and restored with guidance from historic preservationist, Chattel, Inc. Notable features include the exact building footprint and “Y” shape of its tower wings, original window framing at the ground and upper floors, and terracotta mission tile roof. The building exterior was restored to its original finishes and colors. Exterior ground floor and upper level lighting was replaced with exact reproductions of the original lighting sconces from 1928.

The project was subject to review under a Development Agreement with the City of Santa Monica for conformance with the Secretary’s Standards. Design approvals included both a Certificate of Appropriateness by the Landmarks Commission and an Architectural Review Board approval from the specially seated Joint Design Review Body, comprised of representatives of both commissions.

The Landmark Building now houses 55 of the hotel’s 271 total guest rooms as well as retail and restaurant space on the ground level and connects to the adjacent seven-story structure via a bridge on the second level. The finished product successfully maintains the historic building’s original character, featuring Spanish and Moorish details that accentuate the building’s original Spanish Colonial Revival architecture. Inside, interiors (by Kelly Wearstler) are expressive of the old and new architecture.

“This project, which rehabilitated and restored a historic professional building while constructing a compatible modern structure, is an excellent example of how possible it is to build anew while preserving the old.” – The Los Angeles Conservancy

The Preservation Awards Celebration was held on October 27th, 2021 at the Los Angeles Memorial Coliseum. A full list of honorees is available on the LA Conservancy website. 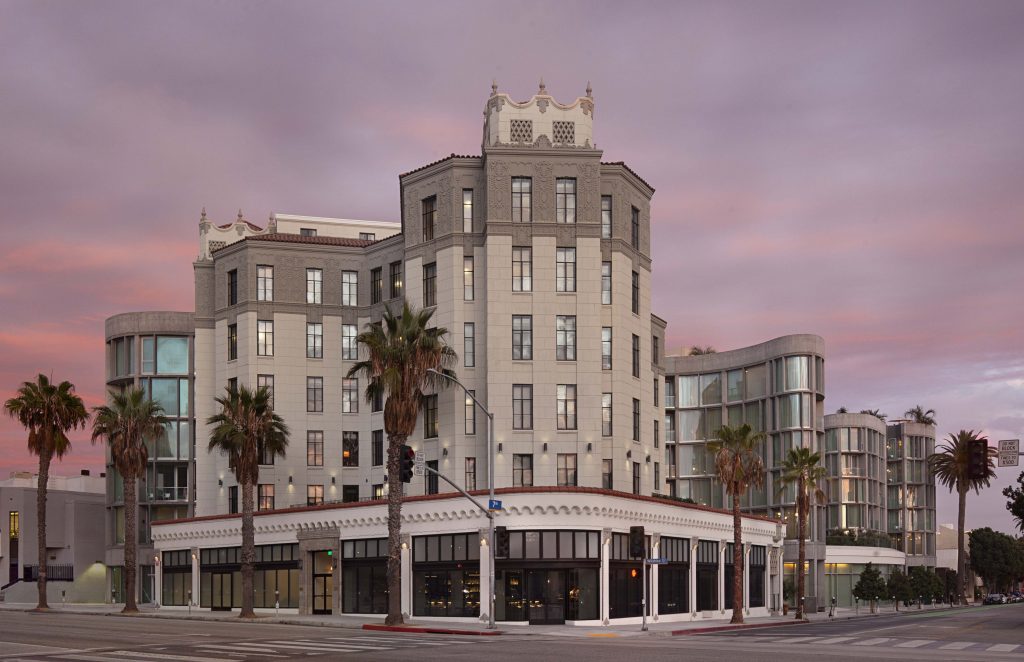